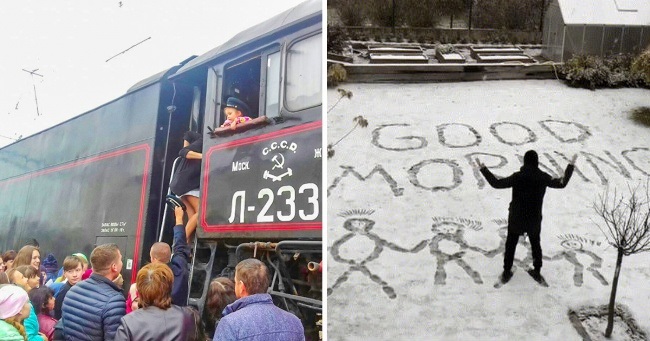 People’s mode of love and romance have changed a lot! In those good old days, everyone was concerned about courtliness. Even asking out for a date was a huge thing and most of the times, the boy went for a girl’s home, present himself to her parents and took her out! It was really beautiful and romantic.

However, maintain those beautiful love etiquettes is not something that we often get to hear these days. Love springs suddenly out of a text came from nowhere and after a one night stand most of the things get over. Even though there can be people who love this sort of carefree life, there are also some who prefer the old way of slow-moving love and for all those people we thought of sharing some beautiful pictures that will speak to your heart.

Some of these pictures are not related to love but still show how great it is to help others and be polite and if all of us think along with these lines, then, of course, the world would be a better place! so, scroll down to see the pictures and don’t forget to share your thoughts about this with us!

#2. “I’m out having dinner and this woman outside was being blinded by the sunset so her date propped a menu behind his head, inside the collar of his shirt, to block the sun from her eyes.” (hiitaylorblake / twitter)

#3. “I heard this in the morning, ‘Baby, a rabbit ran by, come here now!’ I got up from the bed and saw a path with chocolate eggs that led me to a bunch of tulips.” (lkzntsv / twitter)

#4. “My mom bought individual eyelash extensions and the glue for them and now my dad has been sitting there gluing each eyelash on my mom and listening to her music for over an hour. If that ain’t love, then I don’t know what is.” (AnalissaVela / twitter)

#5. “I am a single father and a dirty mechanic, but every time I get my girls they paint my fingernails.” (Wiggle / imgur)

#6. “Here’s the engagement ring box I made. Our first date was watching Jurassic Park in an empty auditorium. It’s laser cut with magnets to hold it closed.” (AceMcClean / reddit)

#7. “This was at 6:30 AM at the bakery this morning. I was convinced that I was going to be first and alone. Thought I was the best husband in the world getting up at 6 on a Sunday to get fresh croissants for Mother’s Day breakfast. Apparently, other people put in even more effort.” (IGotBoredAtMyFamilysChristmasParty / imgur)

#8. “My fiancé who’s an electrician built this box for me to solve in his proposal to me! He wrote a corresponding poem that gave me the answers to the 4 challenges. I said YES!!!” (LetsDips / reddit)

#9. “When I was in the hospital I was sobbing at this couple. He eventually let his wife use him as a pillow while she waited.” (taylorranic / twitter)

#10. “Instead of going out, my boyfriend cooked for me and made a mini-restaurant in his kitchen for our 18 month anniversary. It’s the most romantic thing I’ve ever experienced. He even had Italian music and a virtual view on the TV.” (m/elysiagrimes / twitter)

#11. This man offered to hold this woman’s baby while she filled out paperwork at the doctor’s office. (uhhhhhhh / reddit)

#13. “My husband made this for me while I was on vacation. I had no idea he had such talent.” (Nipsy_russel / reddit)

#14. “He loves me. The hubby made me a heart-shaped funnel cake” (Wellthatsclever / imgur)

#16. “We have only been dating for a short time and we haven’t even said ‘I love you’ yet. But he took care of me after my surgery, cleaned my home, helped me in the shower, and put clothes on me.” (lotionmyfeet / imgur)

#17. “So my husband knows that since moving out to the east coast, I’ve missed Hot Puffcorn with a fiery passion because it’s not sold out here. So tonight, he walks into the store, sees the stand of Hot Popcorn and thinks, ‘I found it!!!’ and proceeds to wipe the shelf clean of the product and buy me every single bag.” (caobf / imgur) 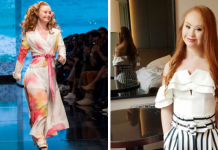