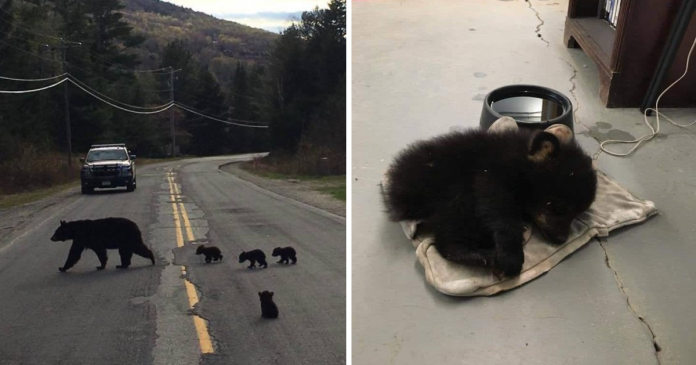 New Hampshire is home to 5000 bears and thus is known to be a particular forest home for bears, which was named as the White Mountain National Forest. One day, state trooper Thomas Owens spotted a bear cub who was in trouble and stopped his patrol car and watched a mama bear and four other cubs crossing the road back and forth, which caught his attention.

He watched for a while until he noticed that one of the cubs kept falling behind and his mother was trying her best to encourage her cub to keep up with her and the other cubs. The little one hesitated to walk and stopped right in the middle of the road while his mother tried to make him walk but the cub was a bit too weak to stand up again. The mother tried but instead, she carried the other three cubs and took them into the jungle leaving the weak one behind.

Owens who saw this happening wanted to help the sick cub, and so he called New Hampshire Fish and Wildlife. He waited eagerly and was a bit afraid because if the mother bear got back, he knew he would have been in trouble.

He knew the little cub needed help on the other hand too. Finally, the cub was taken to a rehabilitation center and helped them to look after the cub. He managed to take a picture with the little one too as seen below.

The bitter truth that the mama bear had abandoned her other cub earlier that day because he was too sickly. The Fish and Wildlife officials went looking for the abandoned cub, and luckily, they were able to find him before it was too late. The cub is now well treated and will soon join his mother and siblings safe and sound. 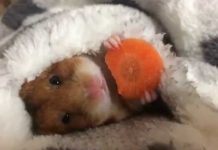