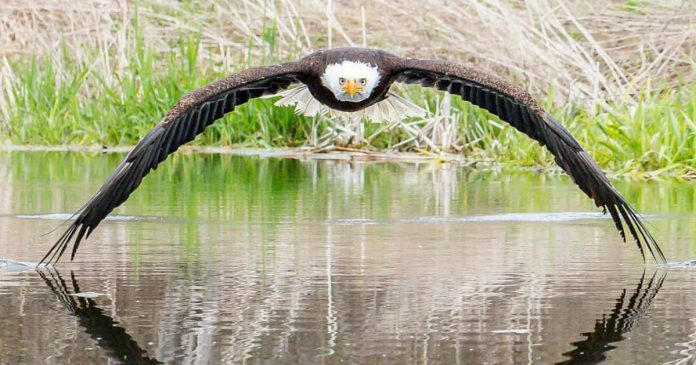 Most of us are truly amazed by the unique beauty of nature. Most of the best shots of nature were taken as the result of hours of the patience of nature photographers but the truth is that sometimes even the effort of several days might not result in giving the best shot. However, in those rare moments, all the factors will combine and will give the best shot that can ever be created.

One such picture was recently taken by Canadian photographer Steve Biro. The picture shows a bald eagle named Bruce, skimming the surface of a pond at the Canadian Raptor Conservatory.

This conservatory is famous among nature photographers as it is being constantly visited by many animals over the world. Biro was constantly visiting the park for many years and it was there he came across with this magnificent bird. He decided to take a shot while the bird was flying above the water. However, it was not easy to capture the shot.

“He’s squared up perfectly, both wings are touching the water,” he told the BBC.

Biro was determined to shoot, even though the eagle was flying inches over his head.

He said it as a magnificent experience, as he felt the breeze from his wings as he flew over him, and people who were there were gasping as the bird came over his head. However, the result was spectacular.

Biro himself considers the picture as one of the best pictures he has ever taken. The eagle was perfectly flying above him and the bird’s angle was quite powerful and confident. He shared the photo on his Instagram account with a caption that read, “So lucky to capture a symmetrical reflection of this beautiful Bald Eagle coming straight at me!”

Biro said he was humbled and thankful by all the love, comments and likes given.

There is no doubt that Biro’s shot is quite exceptional and it clearly shows what patience and dedication will result in!

The Real Side Of Most So Called “Nice” People!

7 Simple Methods For Dealing With Narcissists 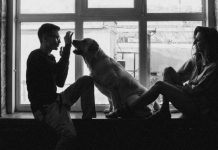 I’ve Been Hurt So Many Times, So Please Know These If...