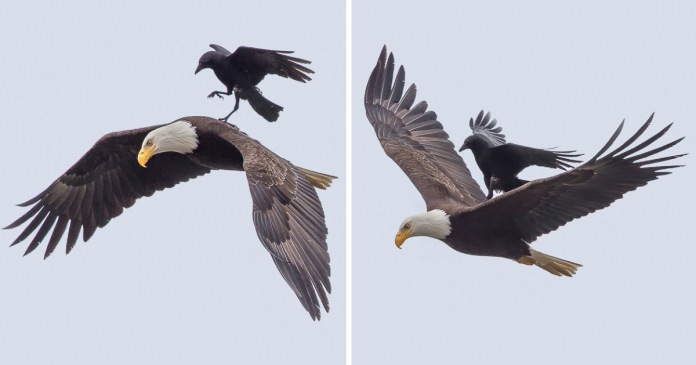 We all know the eagle to be the most ferocious and majestic among all birds. Many mythologies and folklore are woven around the eagle and in most cultures, the eagle is treated with respect. Eagle figures can be found in emblems across countries such as USA and Finland. This king of birds stands in stark contrast to the crow, a bird considered to be a nuisance in most cultures. However, crows are well known as fearless defenders and this incident is all the proof you need.

Phoo Chan is a talented bird photographer living in California. His photographs have even been featured in National Geographic. This photographer with a keen eye has captured unique and rare photographs of a crow landing and enjoying a ride on top of a bald eagle mid-flight. Chan conveys that crows are recognized for aggressively harassing raptors that are larger in body size when they are seen in territories belonging to crows.

The intruders generally retreat without creating any trouble. But in this instance, the crow did not harass the bald eagle and instead decided to land on the eagle’s back. The crow even went on a free scenic ride on the back of the eagle. What a showoff right? The eagle appeared to not mind the crow’s presence and was more than happy to oblige.

Even though the two birds were in close proximity, the eagle was fine with the crow invading its personal space. The photographs depict the crow riding the bald eagle as if it owned the bald eagle. Maybe the crow was trying to make a statement that the eagle was no longer the king of the birds.

Despite these photographs appearing to be unique and strange, this is not the first time a scene as unbelievable and rare as this was captured in-camera. 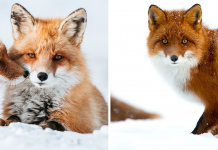 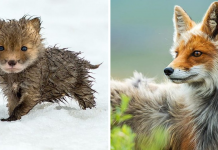 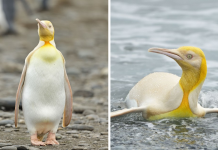 Guy Notices Frog Living In Fence And Made Him A Tiny... 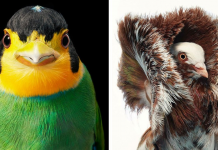 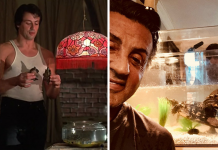 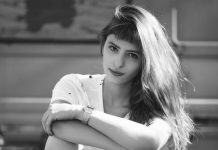