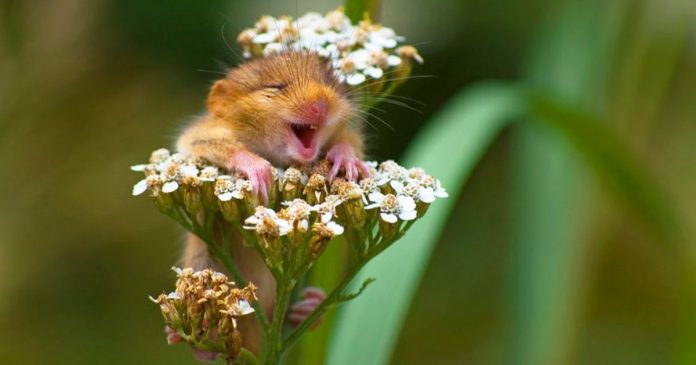 The Dormouse is the common name for any rodent species who belong to the family of Gliridae, also known as Myoxidae, characterized by a generally a squirrel or chipmunk-like resemblance with, large eyes, blunt and curved claws, along with a bushy and long tail. These dormice are usually known for their period of hibernation as they can hibernate for ages.

By appetite, they reside in trees, bushes, rock walls, and nests of plant materials. They usually consume fruit, nuts, birds’ eggs, and some insects and small animals. These species sleep for long periods, particularly during the winter season. The largest species, known as the edible dormouse, is gray in color and has a maximum length of 8cm for its tail.

On the other hand, ‘the laughing dormouse’, was selected as the Winner of the land category in 2017, Comedy Wildlife Awards. It was captured by Andrea Zampatti and it depicts the subtle nature of the dormouse as its best.

Zampatti, the talented photographer, always managed to capture her shots based on the aura of wildlife.

Here are some of the other images captured by the photographer.

It’s time to love for the beautiful Great-crested grebe!

The mighty European Bison or Wisent (Bison bonasus) looking at me in a beautiful birchwood in Bialowieza National Park, Poland.

Proud Member of the deep forest.

He is just posing for the image.

The amazing grace of the Arctic Tern.

“Draco” Also Known As Flying Dragons Exist And They Are A...