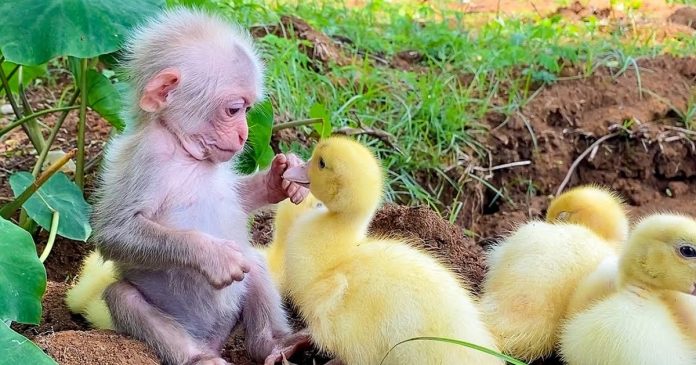 The bonds that form between animals belonging to different species are one of the most beautiful things one could ever witness, especially in the case of baby animals. The level of adorableness in this story is very high because it includes a baby monkey and ducklings. This baby monkey and his ducking family of five are winning over the hearts of everyone. They were captured on video, spending some quality time together, and trust me when I say it is the cutest thing you’ll come across.

This beautiful eight minutes long video footage was captured a few months ago and has been able to gain more than 45 million views. You are surely going to fall in love with these cuties.

This baby monkey takes care of five ducklings as if they were his own family. They all share a very deep bond with one another. There’s no idea as to how the baby monkey and the ducklings crossed paths, but they ended up together to share a beautiful bond.

The ducklings love being in the presence of the monkey and act as if he’s their mother. On the other hand, the monkey spends most of his time trying to hug his little friends. They play with each other and even chase one another. After playing for a while, the creatures get tired and super hungry. They then eat together.

The baby ducks eat boiled rice, whereas the baby monkey drinks his bottle of milk. Even though you might expect them to nap after a heavy meal, they return back to their games as if they have no time to rest. The baby monkey and ducklings also cuddle together and give each other kisses. The video footage portrays the baby monkey as a caring role model.

He touches the ducklings as if he were their mother. The ducklings follow the monkey everywhere he goes, except when he climbs onto trees. Things get complicated when he sees the ducklings at the bottom of the tree. It makes the baby monkey wonder why his tiny friends aren’t following him. Aren’t they such cuties? We hope and pray that their bond lasts forever.

A Man Made A Song Using The Locations Of A Flock...

An Incredible Love Story From United States To Bangladesh

After Watching How Jelly Based Sweets Are Made You Will NEVER...