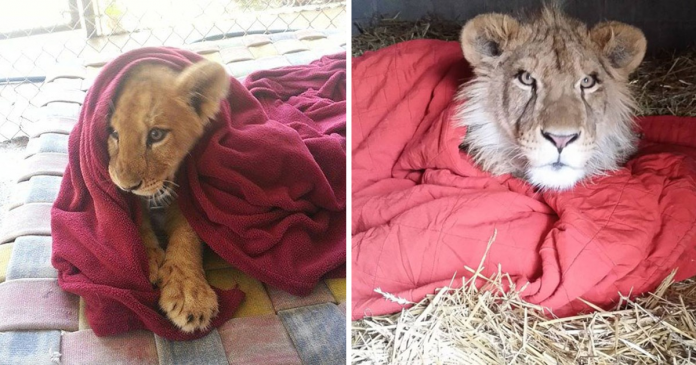 We have all heard of children who can’t fall asleep without teddy bears, but have you ever heard of a lion who can’t sleep without his favorite blanket? You might find this to be unbelievable. Lambert is an African lion. The lion was rescued after he was illegally purchased by a family that came to a decision that they didn’t want him anymore.

Vicky Keahey the human, rescued Lambert from his former family. When Vicky first saw the lion, his looks were similar to that of a puppy dog and he didn’t look like a majestic lion at all. She was glad to take Lambert to her rescue ‘In-Sync-Exotics’.

His previous family obtained him in an illegal manner because the young children in the family wanted a pet lion. This was after the children watched the Lion King movie and observed Simba the majestic creature. So the father of the family decided to make his children’s dreams a reality.

The lion stayed with the family for a short while until the family decided that they couldn’t keep Lambert. This is when the rescue center contacted the family and asked if they could take him in. The family accepted this proposal happily. Apparently, in his previous home, Lambert slept in a bed with the grandfather.

When the lion arrived, Vicky got him a blanket and put it in one of the corners of his enclosure. The lion cub curled up on the blanket and fell asleep right away. Since then the lion has always slept with the blanket. Lambert couldn’t be released into the wild because he was born in captivity and trained to be as tame as he could be.

This is why the center took him in. He now enjoys a large space to run around in. The space includes a covered den, grassy playground, and even a pool to swim in. Although Lambert has aged into an adult lion the one thing that has remained constant is his love for his comfy blanket. The adult old lion can’t sleep without it. Isn’t that just adorable?

You can help Lamberts ongoing care in insyncexotics.org/lambert

According To Psychology, Asking These Questions Can Make Anyone Fall In... 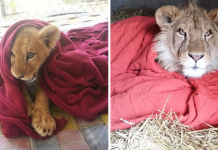 Meet The Man Who Spends His Time Cuddling Lions And Tigers