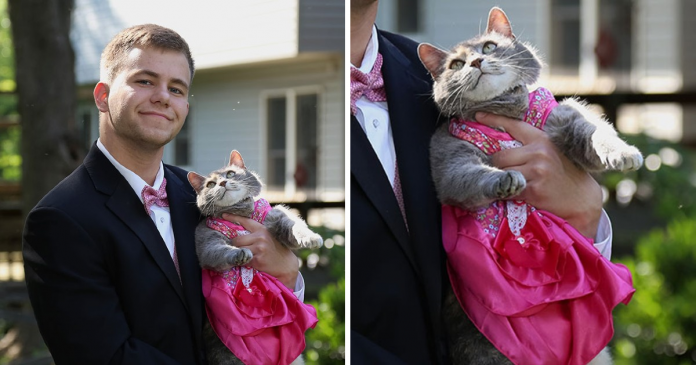 Not everything in our lives goes as perfectly as we plan them. Even though some people find their partners pretty easily, there are also others who don’t have that luck and struggle to find a partner. A prom is an unforgettable event in a teenager’s life. Although teenagers look forward to the prom, there is also a certain pressure that builds up when trying to find the perfect prom date.

Sam Steingard decided to avoid this pressure and go in a completely different direction by breaking the traditions of prom. After all, life is about taking chances and trying new things.

Instead of going to prom with a girl or his friends, this individual decided to go with his beloved kitty. Sam’s mother, Joanne, helped the couple pick the best outfits and they look absolutely smashing. Joanne bought the cat a sparkly collar and a dress so that Sam could take pictures with the cat.

This kitty named Ruby has been with Sam’s family for more than ten years. So she feels very comfortable around Sam and gets on with him very well. Apparently Ruby loves Sam because he talks to her in a baby voice and gives her treats sometimes.

The kitty got the name Ruby because she was rescued from behind a Ruby Tuesday restaurant. This feline loves people, but she loves her family even more. She even says hello to her neighbors. Sam built Ruby a little fort out of cardboard boxes and an old T-shirt.

Although Ruby has a heated cat bed, she prefers to live inside this homemade fort. With time, Sam went to college, but this doesn’t stop him from missing the adorable kitty. One of his prom pictures went viral and even caused a photoshop battle. The people loved these pictures as well as the idea of going to prom with your cat.

Guys, If You Can’t Commit To Her, Let Her Go