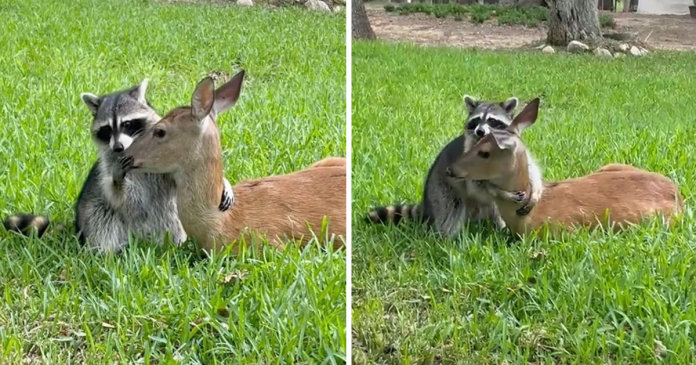 A baby raccoon in need was brought to the attention of Carrie Long, a licensed wildlife rehabilitator, last year. When he was found clinging to life in a rainstorm at the age of just three weeks, he had already been abandoned by his mother.

Since Long’s organization, Texas Fawn and Friends, specialized in rescuing orphaned deer, she decided to take the raccoon in. Jasper was his given name. Long stated that they weren’t sure he was going to make it, but Jasper was able to live because of Long’s generosity and concern, and now he is returning the favor.

Jasper, who has grown up and is now capable of supporting himself on his own, has decided to remain a resident of Long’s deer refuge. Now, he happily shares the vast territory with the 75 orphaned deers that Texas Fawn and Friends care for, but there is one in particular that has undeniably won his heart. A deer named Hope, she also lost her mother when she was a little child. Jasper, though, makes certain she never feels alone.

Captured here is the epitome of their beautiful relationship!

Jasper simply adores her, Long remarked. As soon as he spots her, he rushes to lick and cuddle her. It’s the sweetest thing ever. Hope and Jasper are doing well. And everything is done on their terms.

Long remarked, “He sees her every day. Apparently, She arrives in the evening and lies close to him. They are bonding in a lovely way.”

This year Long plans to care for about 100 orphaned fawns; without Texas Fawn And Friends’ dedication and work, it’s probable that none of them would survive.

A post shared by Texas Fawn and Friends (@texasfawnandfriends)

However, in addition to having their lives saved, they are given a chance to thrive there. None other than what Long would have wanted. According to her, It’s a really satisfying job. 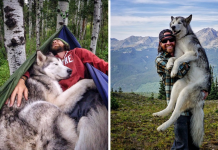 Model With Down Syndrome Becomes The Face Of The Beauty Brand...

19 Amazing Vintage Photos That Show How People Worked Before AutoCAD