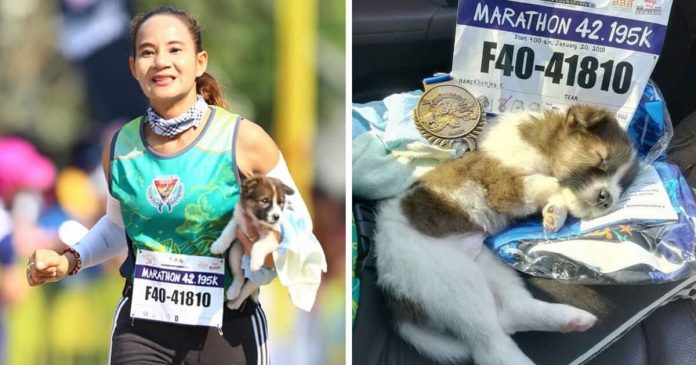 Khemjira Klongsanun is a woman who lives in Thailand. She loves to run and has even won some races. Khemjira has demonstrated that she isn’t just a good athlete, but also a kindhearted individual. It was during one of her recent marathons in Ratchaburi, Western Thailand, that she showed her true colors. She had passed the seventh mile in her 26-mile marathon when she noticed that the runners in front of her were dodging something on the road. It was none other than a stray Thai bangkaew puppy.

After one quick look at the pup, she knew that she couldn’t just leave it there with no mother and no houses in sight. So Khemjira took a break from the marathon to help out this innocent creature. She attempted to persuade the puppy to come towards her, then picked the pup and took it along with her. Khemjira didn’t even give the pup to someone else, instead carried it all the way up to the finish line.

This kind human somehow managed to complete the marathon while holding the pup in her arms. She was over the moon because she was able to rescue the poor creature. This beautiful incident was captured on video and everyone was moved by her kindness towards the pup.

Even though Khemjira tried to find the pup’s owners after the race, she failed miserably. This is when she came to the conclusion that the puppy must have been abandoned by someone.

She then took the pup into her home and named her Nom Chom. The pup is now happy in her new loving home. Her human mother and canine friends simply adore her.

Although it might take some time for the pup to adapt to the new environment, Khemjira is sure that this smart pup is going to be happy living with them. In a world filled with cruelty, this story gives us a ray of hope about humanity. Don’t forget to have a look at the video footage of Khemjira running the marathon with Nom Chom in her hand. 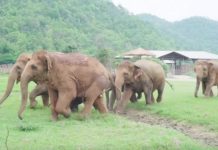