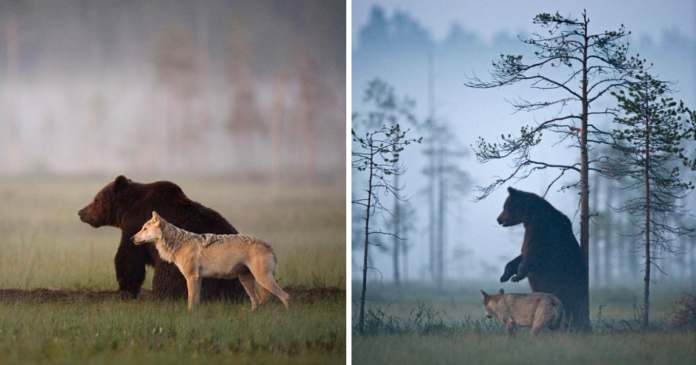 Lassi Rautiainen is a Finnish photographer who captured photographs of a unique friendship between a female grey wolf and a male brown bear. The two buddies were seen every night for ten consecutive days. They spend a few hours together between 8. p.m. and 4. a.m. The wolf and the bear even share food with one another.

Apparently, it is very rare to observe a wolf and a bear getting along this well. It is unsure as to how and why the two creatures became friends in the first place. Lassi assumes that the wolf and the bear felt lonely and weren’t very sure as to how to survive on their own. They were also young so they must have found it nice to share the rare events that occur in the wild.

Lassi was glad to have come across these two friends because it made the perfect story. He felt as if the wolf and the bear found it safe being together. “No one had observed bears and wolves living near each other and becoming friends in Europe” he expressed. This unlikeliest of friendships is sure to inspire us all.

Two of the most powerful creatures in one picture.

Strong alone, but stronger together.

Because friendship is all about caring and sharing.

Running in the wild with your bestie be like.

And who would have believed that a wolf and a bear could be friends?

Just look at the beautiful bond between these two majestic animals.

Respect is the foundation of a strong friendship.

Individual differences don’t matter when it comes to being best friends.

Playful banter in the wilderness.

Size doesn’t matter when it comes to friendship and this photograph is all the proof you need.

Talking with the “TheInfo.me” team Lassi Rautiainen said, “Everyone can visit base Kuikka in Finland to see wolves, wolverines, and bears. At this moment it has 10-12 wolves family. Bears wake up in April and April-October wolves+bears+wolverines at the same time”.

11 Laws Of Karma That Will Change Your Life