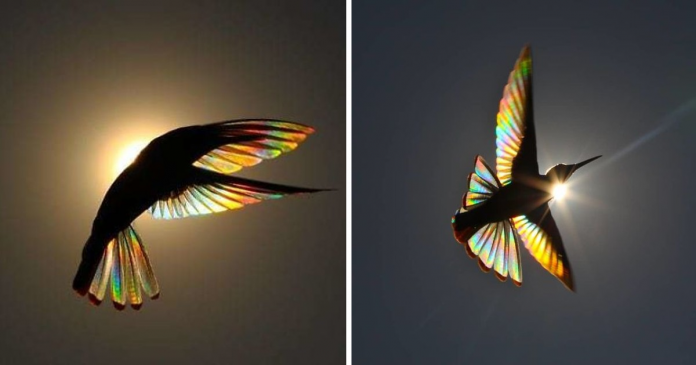 Nature has a way of taking our breath away and this story is all the proof you need. A talented photographer named Christian Spencer was enjoying the sights in Rio de Janeiro when he happened to stumble upon a beautiful discovery. A Jacobin hummingbird was flying past the sun with open wings when the prism effect took place.

It looked as if the creature’s body was made out of colorful rainbows. He captured the breathtaking rainbow movements of the bird and created a film in 2011 named ‘The Dance of Time’. This film was able to procure 10 international awards. After a few years, the talented photographer returned to continue his ‘rainbow hummingbird’ work.

Here he attempted to capture the same phenomenon created by bird wings. The final results were impeccable and he came up with a series of images named ‘Winged Prism’. They display the secrets of nature that can’t be observed by the human eye. Even though many people inquire whether the pictures were edited, Spencer declares that there was no digital manipulation involved.

It is all due to the diffraction of light through the wings of the Jacobin hummingbird. People find this phenomenon too magical to be true. Spencer receives emails from around the world telling him how his images have touched so many people. No one could believe that this was actually real.

#1. Undoubtedly proof of the beauty of nature.

#3. The moment where a rainbow and a bird come together.

#4. Looks like a mesmerizing painting done by an artist.

#5. Have you ever seen something as breathtaking as the rainbow-colored wings of the hummingbird?

#7. A tiny little rainbow of its own.

#8. Looks like a bird that came right out of a fairytale.

#9. One of the most beautiful phenomenon in the world.