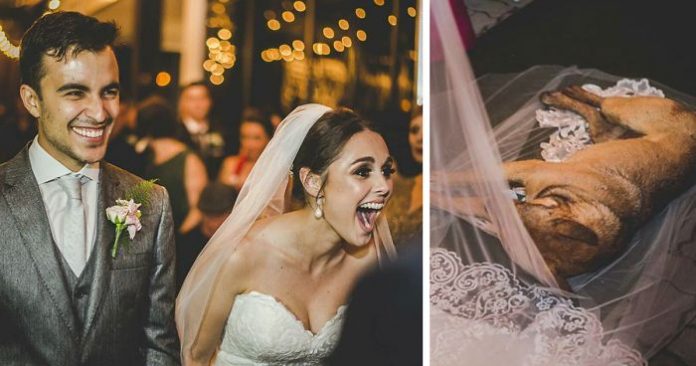 When someone crashes a wedding, it is usually a bitter ex, a weird relative, or a random dude trying to get some booze. But it was not the case with this couple!

Marilia and Matheus Pieroni were just beginning their tented Sao Paulo ceremony when a stray dog marched into the tent looking for shelter from the pouring rain outside. The dog was removed when the couple marched down the aisle, ready to read their vows. But unexpectedly, the canine decided to return and have a nap in the middle of the ceremony. And the place he thought was perfect for a nap? On the bride’s veil!!

Some women may have gone into full Bridezilla mode at this point, but Marilia was cool and thought that the pup should be welcomed as an official guest. “It was a very pleasant surprise for me because I love animals,” Marilia told The Dodo.
As the night came to a wrap, the couple looked for the dog so that they could provide him with a forever home but the pup was nowhere to be found. And then, commenced the city-wide search for the lucky canine!

#1. This is Marilia and Matheus Pieroni, the couple from Sao Paulo, Brazil, who just got married!

#2. A rainstorm had broken out on their wedding day so the ceremony took place in a tent.

#3. And something unexpected happened when they were just about to say their vows.

#4. A dog had wandered in and laid down on the bride’s veil!

#5. Unlike many other brides, Marilia was absolutely thrilled about this!

#6. And the wedding crasher was allowed to stay.

#7. At the end of the night, the couple decided to bring the pup home, but he was nowhere to be found.

#9. The surprise guest was found and they finally reunited.

#10. They named him Snoop and they are a family now.

#11. “…I showered him,” Marilia told The Dodo. “He is very happy and slept super good the first night”. 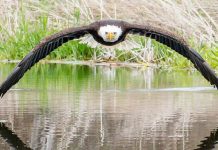 Best Friends Build Their Own Tiny Town So They Could Grow...