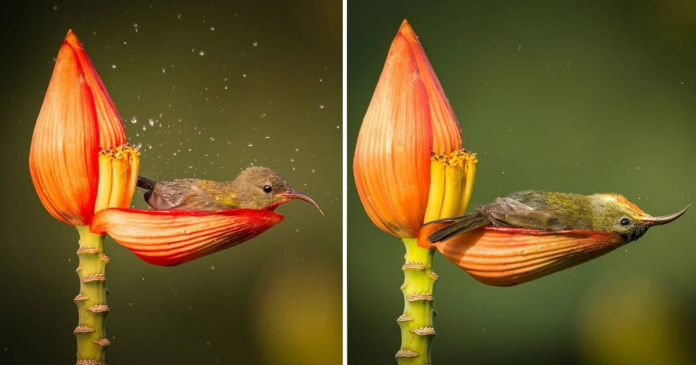 Even though life is rather monotonous at times, once in a while we come across significant once-in-a-lifetime moments. Rahul was also lucky enough to witness one such rare incident and he even managed to capture this moment. Rahul Singh is a wildlife photographer with great talent. He has been able to capture so many mesmerizing photographs of various animal species.

So far he has photographed animals such as deer, monkeys, elephants, jackals, and rhinos. Even though all these captures are equally beautiful, Rahul’s passion lies in capturing photographs of colorful birds that are found nesting within his home city. One day he decided to visit a place that consisted of bushes of ornamental bananas. His hope was to photograph sunbirds sucking nectar from banana flowers.

Everything seemed rather normal until a crimson sunbird began having a bath in the water stored inside a banana flower petal. Witnessing this beautiful moment left Rahul in a state of shock. The banana flower is a red petaled flower. The water that had collected on one of its petals was due to an early morning drizzle.

Since it was a warm day, the 4-inch long crimson sunbird decided to have a bath in order to cool down. This was all after it filled its belly with nectar. The coolness of the water and the filled-up stomach would have definitely allowed him to enjoy some relaxing time. Though Rahul had been a wildlife photographer for a while, he had never in his life encountered something like this.

It was a once-in-a-lifetime moment. Since Rahul was stunned by the sight of the tiny songbird having a bath and displaying this unusual behavior, he kept the shutter button on his camera pressed down. This talented photographer then posted these photographs on his Instagram account.

He was glad that he was in the right place at the right time or capturing this breathtaking moment would have been impossible. “This was really a once-in-a-lifetime moment. It’s amazing how nature can surprise us” said Rahul. If you have a closer look at his captures then you will surely understand why he feels this way.