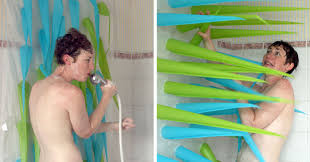 Environmental issues have been one of the main issues we face as the humankind. With rapid climate changes, the planet is becoming more and more hostile, and the lack of drinking water is one of the crucial concerns. Scientists and experts have come up with numerous ideas to save the precious little water we have left. This particular individual, however, has taken the conservation of water to the next level.

Elizabeth Buecher invented the inflatable shower curtain that releases spikes if you shower longer than 4 minutes. She stresses that desperate times lead to desperate measures. The spiky curtain is part of the series called “My Shower is a Green Warrior.”

How long do you shower? Do you get really comfortable in the shower? Do you transform your shower time into an audition of a reality show? If so, this shower spikes are bad news for you because the spikes WILL kick you out of the shower once you have reached your 4-minute restriction!

Even though this idea looks a little hilarious, it is actually a good solution to the water crisis faced by the world at present. Many countries in the world suffer from lack of water, some families have to walk miles and miles in order to find some water to fulfill their daily needs. So, after all, it is not a bad idea to have a shower curtain which kicks you out if you are wasting water, right?

And also, do not forget that these spikes are not harmless. They won’t stab your or something! so you have nothing to worry about! 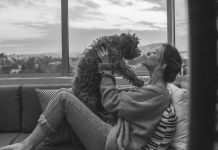 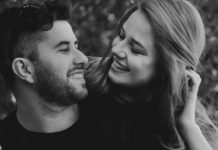 The One Who Really Loves You Won’t Be Bothered By Your...

12 Signs You Are Eating Too Much Sugar